A good mystery is a challenge even for a veteran writer. At its core, a good mystery is a puzzle for the audience to solve while providing enough of a narrative to keep the story itself going outside of the crumb trail of clues. This means the characters must be engaging and smart, but not smarter than the audience itself. This is why the point-of-view character for the Sherlock Holmes stories is not Holmes himself. Same for most classic detective or noir stories. It allows for the audience to enjoy the story while not getting overwhelmed trying to figure it out.

Most modern mysteries rely much more on the character development and overall plot for this reason. It allows the audience to engage with the story without having to worry about if they’re keeping up with the mystery. However, for writers that are up for the challenge, it can mean either a very rewarding product for the audience or a very frustrating one. Red Thread Games decided to walk this line with their latest project Draugen. Draugen, at its core, aspires to be a classic mystery: using the traditional noir archetypes of a quiet town and a troubled protagonist. But, can it walk the line and deliver? Let’s find out.

The year is 1923. You play Edward Charles Harden, an American traveler who’s come to Norway to find his missing sister. But you’re not alone: at every step of the way, Edward’s accompanied by his ward, Lissie; a gregarious, independent and enigmatic young woman. Together, you must explore this scenic coastal community — nestled amongst the fjords and mountains of rural Norway — in your search for Edward’s sister, and unearth the darkness that lies beneath the picturesque surface.

Let’s start with the town of Graavik itself. Even by 1920s standards, the town is isolated. Locked in a fjord with one telegraph service and getting mail from time-to-time, Graavik is an immediate puzzle box. It doesn’t hurt that Edward and Alice seem to be the only people left in town either. The developers do a fantastic job here of pacing the story and using its setting to drive the tale. The only location our protagonist have access to at the start is the main home in Graavik because that was where they were specifically invited. The main characters’ search for people is what drives the beginning of the story and the stress of finding no one begins the dive into what makes Edward and Alice tick.

It’s important to give kudos here because many developers can’t nail the type of depth we get from Edward and Alice so early on. They are nearly fully formed for the audience by the halfway point and that is done completely from the environment they are in and their banter. It is so strong that the moments when Edward and Alice separate re-enforces how quiet the world is without her: something I noted when I was streaming it some weeks back. This plays into some revelations in the second half of the game, but without this pivotal first half we wouldn’t have anything to build on. So, kudos there.

There are three mysteries in Draugen: the mystery surrounding the disappearances in Graavik, Edward looking for his missing sister and why, on Earth, was a teenage girl travelling with an adult man to a town in the middle of Norway. The mystery surrounding Graavik stays true to the formula I mentioned at the beginning of this review, while the mystery surrounding Edward’s missing sister Betty is less straightforward thanks to our POV character, Edward, being an unreliable narrator: another traditional noir trope. However, as the two mysteries began to overlap, the pacing for both would allow the audience to follow all the clues correctly without being overwhelmed and if I have to spell it out, that means it didn’t happen.

The introduction of the third mystery surrounding Alice herself complicates things because the audience has absolutely nothing to go on. We have hints of clues on what the Hell is going on, but the midpoint reveal shatters all the work done in the first half of the game. I won’t spoil anything here, but you can read my theory on the character here. The important thing to take away from it is that there is nothing either of the previous story arcs can do to recapture the audience’s attention after the midway point. Alice takes our full attention and we have no choice but to accept that the game’s biggest introduced mystery is one that it isn’t even going to try to explain.

That complicates things, to say the least. The only mystery with a definite resolution is Edward and his Sister. Of the three mystery arcs in Draugen, it has the most predictable resolution. The mystery of Graavik becomes more subjective as we get closer to the end and the game never gives us a definitive end: allowing the audience to form their own conclusions about what happened to the town. It isn’t completely satisfying, but it does feel like the natural end to the town’s story arc. However, Edward and Alice move on like the events of the story doesn’t happen, which includes the mystery surrounding her.

This is ultimately damning for the game as it keeps the audience behind a wall getting peaks at something more supernatural without being able to interact with it. If the game was a bit longer, or it tied up one of its other mysteries earlier, it would have had a bit more time to dig into what proved to be the most interesting mystery Draugen had to offer.

Aesthetically, Draugen is amazing. The town of Graavik is lovingly rendered and looks like a neo-classic portrait. Several points in the game encourages the audience to stop just to take in the scenery. This serves not only as a good point to show off the work of the art team, but also a chance to breathe. And when the world goes silent long enough, those chances are vital to keep the audience invested. Similar praise can be given to the soundtrack. The composer Simon Poole did an incredible job creating a musical work that blends so well with the overall look and direction of the game and is seamless in invoking the mood for the moments the game wants at any given time.

The one weakness Draugen has is in the character models: specifically, Alice. From a design and programming standpoint, she is the latest in a lineage that includes Elizabeth from Bioshock Infinite (her nickname, Lizzy, even lampshades this) and Alyx Vance from Half-Life. What sold those characters though was not only their personalities and the acting behind them, but also their facial animation. This was especially true for Elizabeth and the work behind her creation was a big focal point for Irrational Games at the time. Red Thread didn’t have the resources to get everything needed to create something similar with Alice and the developers do their best to work around it: nailing several key moments with the character. But, for the most part, the fact that her face rarely shifts outside of the two emotional extremes of very happy or very angry keeps the character from being the emotional anchor the game wants her to be.

On the technical end, Draugen is, at heart, a walking simulator. A minor choice mechanic is included to allow for different dialogue options, however these options usually just add to the conversation without being definitive choices that alter the game. There is also little challenge to the detective mechanics. Most of the puzzles are easy enough to figure out and even mild challenges will see Alice pulling most of the weight. It’s all serviceable, but don’t expect anything to overall add to the experience beyond the straightforward stroll. 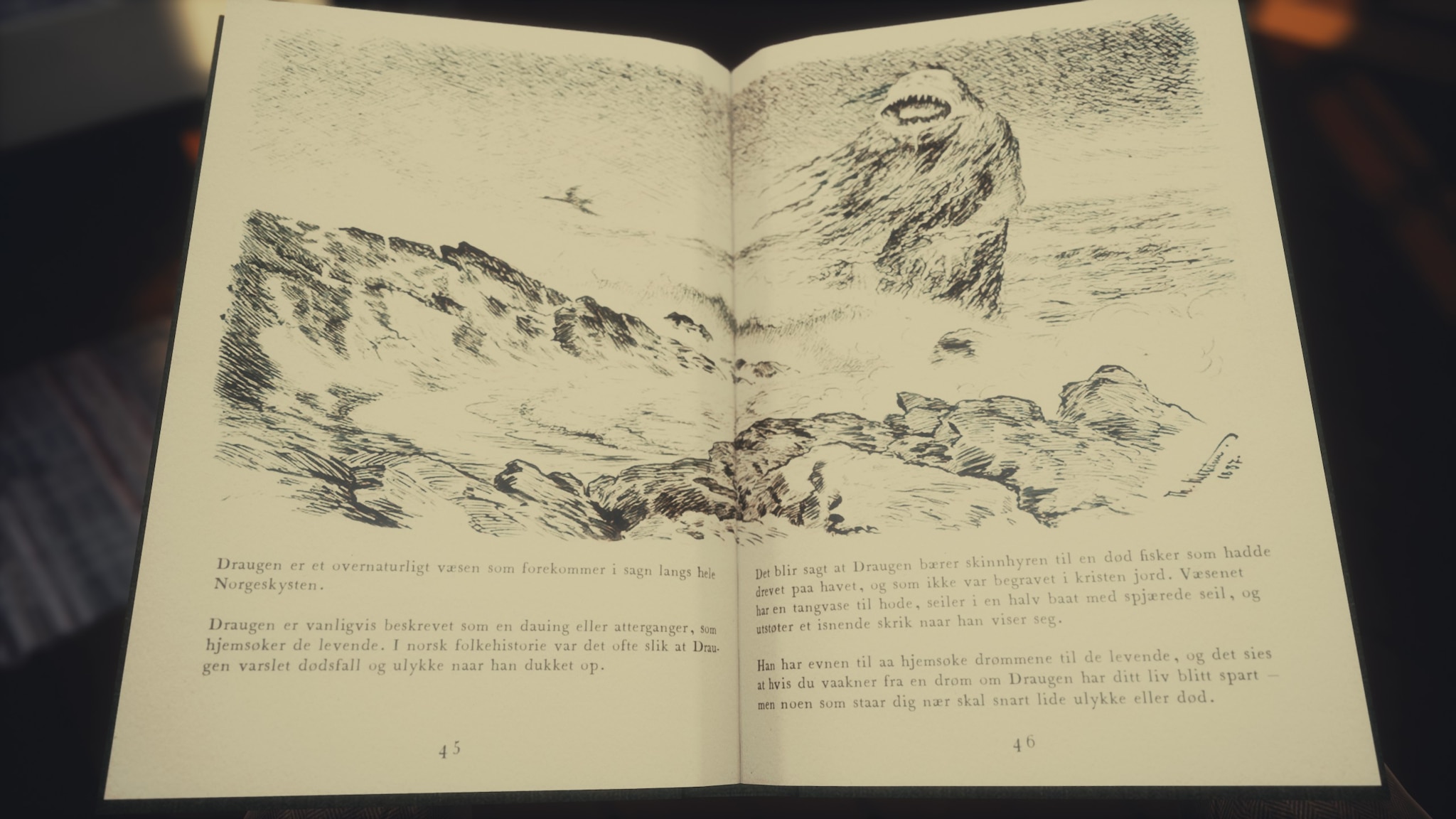 Draugen is about three to three and a half hours long. All things considered, that makes the retail price of $19.99 seem a bit steep: especially with other, more involved games asking for much less. And that’s just for the regular version. The Collector’s Edition, including a PDF of the artwork and the original soundtrack, retails for $30. Had the game reached its clear goals, I would sign off of that price rather easily. For what it is, though, I would suggest waiting for a sale before giving this one a try. The three hours go by much faster than even I expected and saving a few dollars will ease the shock that it’s suddenly over.

Draugen is, in many ways, a step forward for Red Thread as a developer. Most of the story was well-delivered and the game’s world is a testimony to the care and dedication that can come from a passionate group. For the most part, I enjoyed the game. However, I cannot deny that it missed its own set mark.

There didn’t need to be another mystery thrown in at the midway point: period. Either removing it or making the game a bit longer to address it would have gone a long way. By including it the way they did, the developers mistakenly complicated a straightforward tale about grief and the dark places it can lead to. While that remaining mystery surrounding Alice serves as, yes, sequel bait to bring us back for another round, the fact that it overshadowed some solid work in its original installment means that for all Red Thread has learned, it still has a ways to go.

Draugen is a stunningly beautiful game that, unfortunately, saves its best plot thread for another game: eclipsing a solidly written and well-acted effort.