I think, for the vast majority of fans for any entertainment medium, they have standards and can have a reasonable discussion on said medium…just not on the Internet where the immediate emotional validation of being in a tribe, any tribe, is more appealing than critical thought. The pull of the emotional against the rational is so ingrained into the human subconscious that I’d bet most people who get involved in arguments over their personal preferred media in this digital space walk away from them in a similar haze to that of someone waking up from being under anesthetic. However, that doesn’t mean someone has low standards or even no standards; just that they’re selective in applying their standards. When that happens, where does it lead? What comes out of a community that refuses to apply standards to their media? And, to reiterate the previous question, does that lead to an audience putting together a mental test to judge whether or not the media they’re consuming is good or bad?

Keep that thought in mind. We’ll come back to it at the end of the review. For now, let’s turn our attention to Pixelfade.

We talked about this group a few times before and reviewed their first big project Ace Academy here. Ace Academy was not a bad game, but it was far from a good one. It simply existed to fit into a trend within the anime market at that time: the aptly described ‘There is a High School for Everything’ subgenre. Despite being vanilla as sin, it did well enough to warrant interest far after the project was over. Now, Crystalline is on my radar: its day will come, believe me. But first, let’s go back to the amazingly boring world of 2049 for a sequel to a story I’m sure someone asked for. This is Kaori After Story.

Taking place after the events of the main game, you resume the role of our Generic Male Protagonist in an epilogue focused on the finale of his relationship with Kaori : the game’s resident tsundere. After the events of her route, our GMP decides to spend Christmas with Kaori and her family for week of, well, little of nothing.

Let’s pause right here and take a moment to discuss the Slice-of-Life subgenre as well as the concept of ‘nothing happening’, because there will be some who looks at their opening statement and say, ‘Well, duh JP. It’s Slice-of-Life. It’s going to be boring.’ To which I say, that is a very narrow-minded view of Slice-of-Life. I will not pretend to be some expert on the subgenre, but what makes Slice-of-Life stand out as one of the pillars of anime and manga is that it either provides an exemplary character study or it takes place in a setting that makes the story naturally interesting. To put a point on it, VA-11 HALL-A is a Slice-of-Life story. It just so happens that story is an alternate point-of-view to other cyberpunk stories.

So where does that leave the broad narrative critique of ‘nothing happening’ in a story? Change and/or conflict are not necessary to write a good story, but what IS necessary is a well-written character at the center who can keep everything interesting.

I’d argue that most media without a centralized plot or defined character arc could probably fit into the Slice-of-Life subgenre. Which is why Kaori After Story will not be able to use its chosen subgenre as an excuse for nothing happening. At all. Period.

This is far more damaging to the game than it initially appears because the characters in them are supposed to be established from Ace Academy: at least that’s the conceit. An epilogue, or ‘after chapter’ or DLC if you will, should appeal to anyone who played the original game and wanted to continue their time with that game. And if you recall may thoughts on Ace Academy, one of its biggest failures was in not developing its characters well. Kaori was a big victim of this approach: mostly stuck in her tsundere ways only to get a slight reprieve if the GMP decides to date someone else. Instead of using this extra chapter to develop her character, the developers chose to instead keep her rigid in her ways. I’m sorry, that is viable (certainly not good, but viable) IF this is a one-off side character that serves as a foil to the main character(s). The entirety of this game hinges on her being an interesting, developed character before the romance even starts.

This has gone from being a thinly veiled attempt to cash on the diminishing returns of the tsundere stereotype and has become a flat-out insult to the audience. There are several scenes of the GMP and Kaori sleeping in the same bed together, spending hours alone away from her family in the countryside and nothing happens. I didn’t expect them to start rutting like wildebeests or anything. But, some level of intimacy or comradery or even a five second glance to show that this Kaori had experienced something in Ace Academy other than mild boredom would have gone a long way to make the game bearable. As it is, you will spend much of the two hour run time grinding your teeth as the game intellectually and creatively checks out.

Kaori’s family does make an appearance, but her identical, fashionista twin sisters should be a bigger red flag that graphite on the ground of Chernobyl. Everyone is just so excited that little Kaori finally brought a man home. Their unsubtle attempts to get their youngest sibling/daughter laid is…something; culminating in them getting her gag Christmas gifts to encourage that animal rutting I was being sarcastic about earlier. While it is clear they care, that’s all we get out of them. The only member of her family who escapes this crap cyclone is her Father as in a bid to avoid boredom, our GMP finds Kaori’s Dad working on a mech model kit: this world’s version of Gunpla. It turns out that he got into it because while he didn’t understand the popularity of the mechs, he knew his daughter did and was a fan. So, they worked on the model kits together: allowing him to share in Kaori’s interest and giving them something to connect over.

THAT IS WHAT THIS ENTIRE GAME SHOULD HAVE BEEN.

Not the longest story break down I’ve ever done, but at a certain point you just start repeating yourself. The plot of Kaori After Story is empty calories: sizzle over steak. Once again, PixelFade has put the appeal of its presentation over telling an interesting, entertaining story. So then, does the Presentation at least achieve that much?

Look, I’ll be the first to acknowledge what PixelFade has done for the visual novel developer’s community and EVNs at large on a technical level. They were one of the first, and are still one of the few, to pay for voice and music assets along with pouring money into high-quality background and sprite work. Without even getting into the complications and costs of the Live 2D engine they’re using now for some sprites, I don’t want to think about the amount of money that has been poured into making these games look and sound the way they do. For that, PixelFade is to be commended and that should cushion the blow I’m about to land on this presentation so let’s get into that.

The Presentation of Kaori After Story is good, bordering on great. The detail of the backgrounds are intricate and beautiful and the main star, Kaori’s Live2D sprite, is well done. Some movement are still stilted and robotic, but the facial animations are well done and gives a more kinetic feeling to some of the dialogue. How the game sounds is a bit more complicated. The music is okay, but generic and uninspired. If you’ve watched an anime in the last ten years, you’ve heard tracks like these ad nauseam. It isn’t so offensive that you have to mute the background music, however you’ll be surprised at how easily it bleeds into the background.

The real deal breaker is the voice acting. The cast are trying and you can tell in the comedic scenes. The guy voicing Kaori’s Dad, an actor named Will Benzel, deserves particular credit. The one scene that delivers on an emotional level depended on him to carry it and he did a fantastic job.  But, overall, there is no saving this material. Kaori’s actress suffers the worst of this as most of her scenes unfortunately fall flat. It feels the only direction she got on it was, ‘You’re a Tsundere….AND GO!’ I’m not sure how PixelFade gets its voice actors to do their work, but it doesn’t feel like a voice director is involved. If they’re going to continue having a voice cast in their games, they need to get one. A good one. PDQ.

On the technical side, the only odd note here is the continued inclusion of meaningless choices. Most of the options here could have been scrapped or reconfigured. Choices in visual novels should be consequential and take the conversation in a direction that gives the audience more information about the characters in in. However, since we’ve already established that the last thing this game wants is to build its character, it feels like its there mostly to ensure the audience has something to do. Mate, just make a kinetic VN and be done with.

Other than that, no bugs or glitches to report. 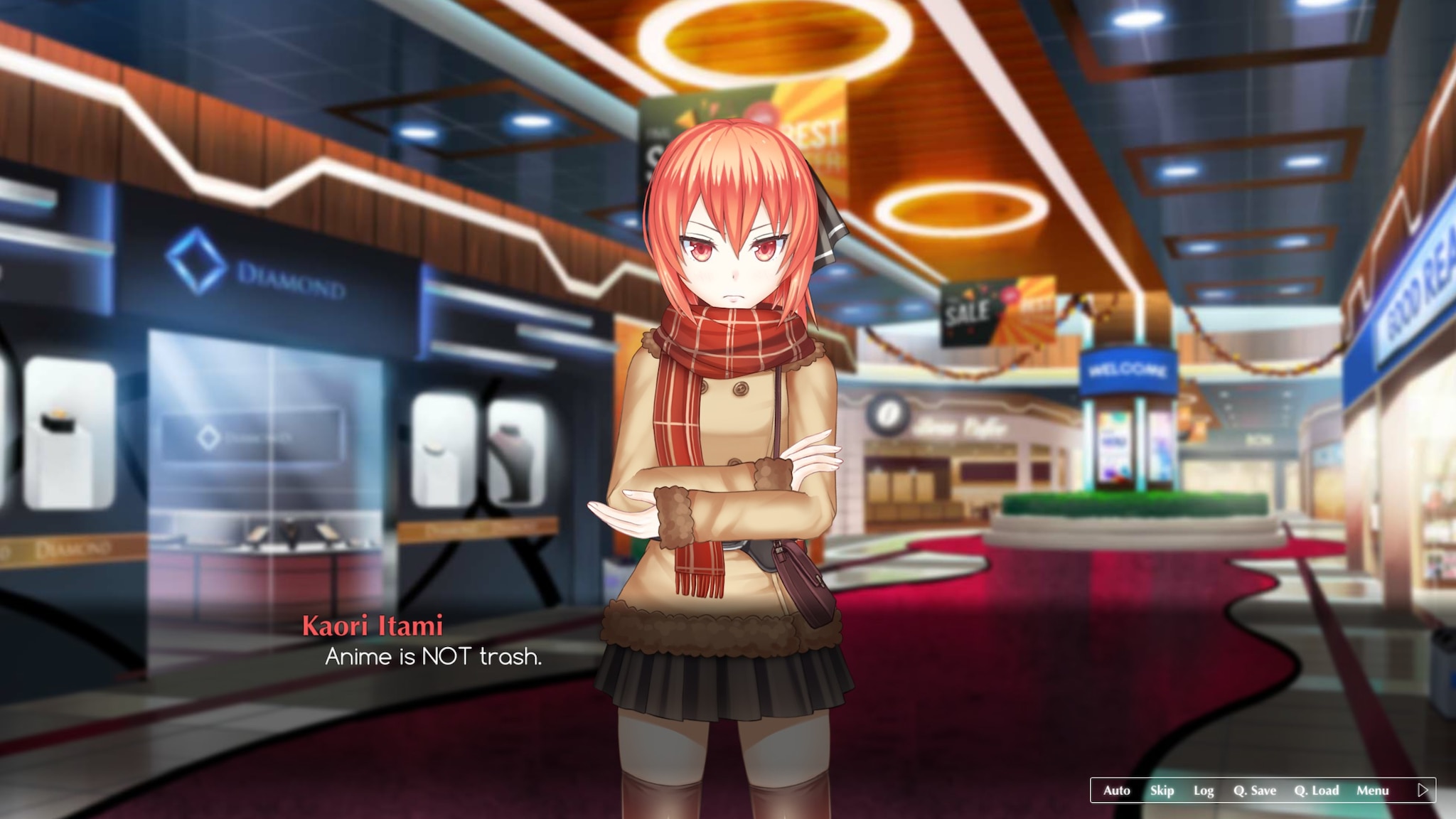 Kaori After Story will run you about four hours at retails at $9.99. $9.99, for what is essentially glorified DLC for Ace Academy. As hard as I was on Nekopara for what they did with Volume Zero, it would be beyond hypocritcal to suggest this for even hardcore fans of Ace Academy or PixelFade’s other works. You can get this exact same premise for free. Save the ten dollars for Chick-Fil-A’s new Smokehouse BBQ Bacon Sandwich (unpaid advertisement, because Chicken Too Good).

At the end of the day, there is very little substance to this story. Anyone with a basic understand of anime tropes and cliches can come up with this exact scenario. To that end, Kaori After Story is a boring return to a generic world. Don’t be surprised if you forget this one within hours of playing it.

Kaori After Story is a forgettable experience featuring cliches done better elsewhere. While it won’t be the worst PixelFade produces, high aesthetic polish cannot cover their dearth in creativity much longer.