What Went Wrong (For Me) With Coffee Talk

Considering our new format, my initial plan was to hold in-depth critique of anything I reviewed until after the Review Digest. However, I have a few things to say about Toge Productions’ Coffee Talk. I’ll still do an official review. Today though, I will be discussing why I did not like this game. I will do my best not to veer into rant territory, but this is necessary to get off my chest now and hopefully it will give the future review some context.

‘Coffee Talk is a game about listening to people’s problems and help them by serving a warm drink out of the ingredients you have.’ That is the description of the game from the website and the entire game’s plot is built around creating this environment. Everyone is affable with quickly understood personalities, motivations and storylines. The world itself while filled with fantasy creatures of all stripes, is not that distinct from the current year. Even so, those problems seem to end at the boundaries of the coffee shop. As one character outright says, ‘It is a safe place.’

In theory, creating a title with the intention of giving players a calm experience they can pick up whenever they want to relax is a winner. After all, people were willing to knife-fight over Animal Crossing (really). However, in practice creating a title like Coffee Talk requires the creators to make certain assumptions about the audience. Namely, they have to assume that the audience for their game don’t want much in terms of story. In other gaming subgenres it’s easy enough to ditch the story in the name of escapism. In First-Person Shooters or Fighting games, that is more than enough. You can easily relax by sinking a few hours in Call of Duty or Street Fighter III: Third Strike (AKA THE BEST ONE) with no higher expectations.

However, in a visual novel, there is only one way to lower expectations to that point. As much as it kills me to admit it, the only proven way to have your audience pick up a visual novel looking to sink several hours with no expectations in terms of story is if you’re serving up sexual fanservice. Even Otome and romance titles have a higher demand than the basic lines of ecchi or hentai visual novels. If you’re not going to make your cast look like something out of a technicolor nightmare, you have to bring something else to the table. Coffee Talk doesn’t.

A ‘safe’ environment is a controlled environment. That means no surprises, no twists and especially no true conflict. I say this because artificial conflict can and does exists in the game. There is just never a suggestion that it cannot be resolved. Take, for example, Mr. Gala’s transformation into a werewolf. There are herbal remedies that will keep him calm during his transformations and the game immediately tasks you with figuring out what it is, right before grabbing hold of your hand and telling you what you need to do. Instead of a ticking clock keeping you on your toes, you instead have no worries as you should be able to figure out exactly what you need to serve up in two nights time: well before Gala’s transformation.

It’s especially a shame because Gala is possibly the only fully realized character in the game. We do not know his full backstory, but we know just enough to get a sense of his personality. He has unfinished business, a past and, most importantly, goals. He also has a long-running friendship with a vampire that I am very surprised the developers restrained themselves on pushing into a full on romance: keeping it as more of a one-sided, potentially unrequited attraction. To have this fleshed out character form a relationship with the audience, only for the audience to know they have a limited time to figure out how to keep him from hurting himself and others could have been used very well. Since it isn’t, we have to move on. 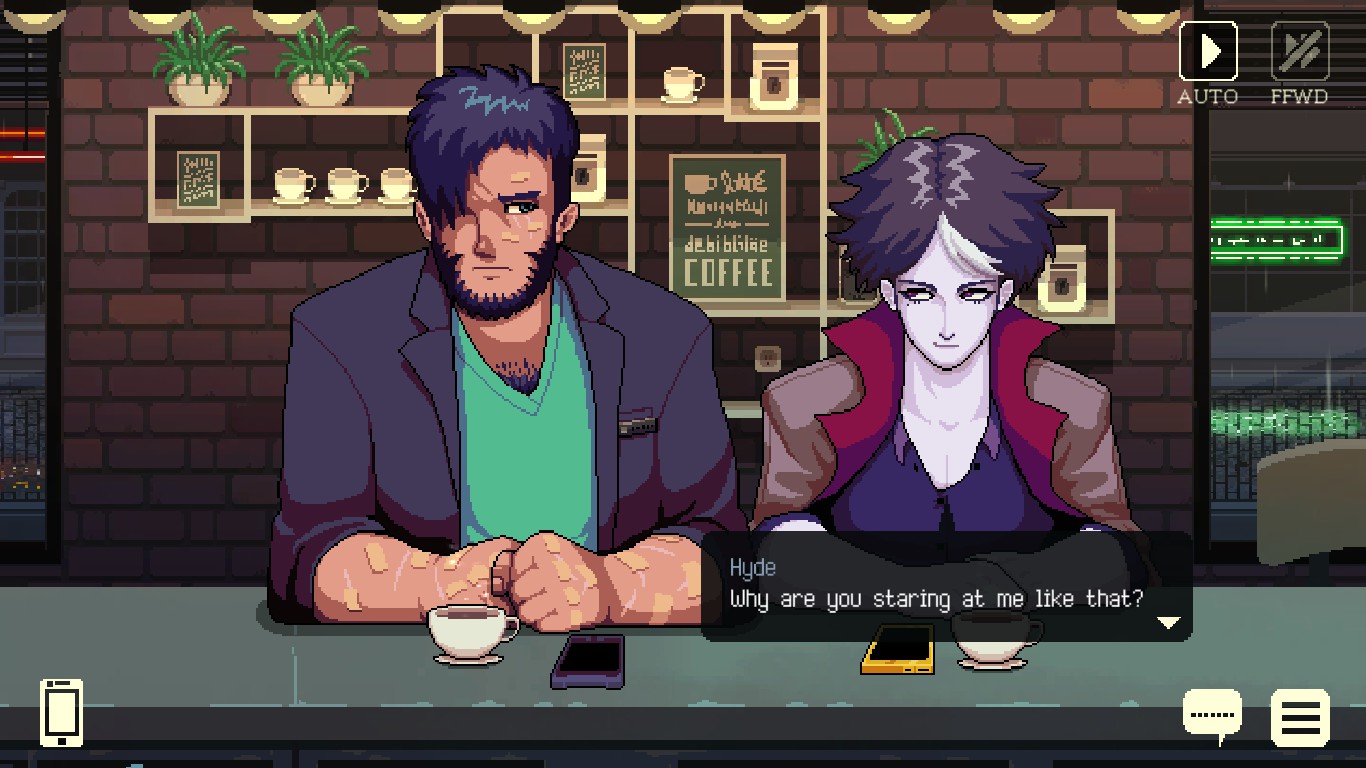 I’ve spent a few days thinking about this game and contrasting it with its clear inspiration: my 2016 Visual Novel of the Year: VA-11 HALL-A. On the surface, they offer similar technical experiences. However, playing them both led to two vastly different responses from me. Simply put, VA-11 HALL-A was not ‘safe’. There was crime, lies, corruption; sin. And the the middle of this very dark world was the main character with her own demons fighting to keep her life going forward the best way she knew how. This required you to learn your customers and give them what they needed to keep talking and run their tab up and those stories are often unsolvable. Most of the characters in the game cannot be helped by the protagonist. Being in that bar is just a pause in their own personal stories as they try to survive and live their lives the best way they can.

Or, to put it a bit more artfully, it’s Tears in the Rain.

This isn’t to say that the only way to build a story. However, this approach entices the audience to invest emotionally in the larger game. Coffee Talk does not want you to invest emotionally in the game. In fact, the game would prefer you didn’t think too much about it at all. And, simply put, without investments, you cannot create the ‘comfort fantasy’ they’re shooting for. All you can do is what Coffee Talk ends up doing; treating the audience like daycare and not a consumer base. And knowing that, my best conclusion is that there are other, better ways for me to turn my brain off.

That’s my two cents anyway, but I am curious to know how others who played the game reacted. Do you find merit in the ‘comfort fantasy’ or where you hoping for something to happen that could make the story interesting? Let me know in the comments. JP3: OUT.