“However, as a certain anime reviewer always says, ‘The Ending is Paramount’ and this one face-plants the mat about as hard as I’ve seen any game face-plant. A little more control and focus throughout their next game and it should be a solid hit. In the meantime, this will definitely get a feature explaining the ending and my problems with it because I need more space.”

Rainswept is a contradictory game for me. The dram hits several strong points and on its own could easily focus on small town culture along with the secretive nature such culture promotes. However, that narrative thread is balanced on a mystery narrative core: one where a young husband apparently kills his wife and then himself. This is, unfortunately, where everything falls apart and keeps me from agreeing with the mass consensus. For this feature, I don’t want to spend too much time focused on what the game wants to be. Instead, I want to focus on what happened and how it fell apart. My hope is that by doing so, anyone writing their own murder mystery can learn from the mistakes the developer made here and make their story more engaging.

Of course, there will be spoilers here so for those who want to play through the entire game themselves, you’ve been warned. Let’s get started.

To understand exactly what went wrong, you have to understand the crime scene and how in connects to the game’s ending. The crime scene is not only where we get our first idea of the larger story threads for the game, but also our first clues to the murder. Whether or not we agree with the protagonist Michael Stone, who is immediately unconvinced that it is a murder/suicide, is dependent on what we find in this scene. So, what do we find?

So, everyone on the same page? Based on this evidence, along with personal biases, the local police believe Victim #2 shot Victim #1, then himself. Detective Stone believes something is out of place, but doesn’t have the evidence to back it up. So, is it a murder/suicide? Yes and No. Both the local police and Detective Stone are correct. How? Well…..

Cutting through the vast bulk of the story, a teenage neighbor of the victims named Johnny killed Victim #1. The gun belonged to the husband, Victim #2, and Victim #1 asked Johnny to take it and hide it due to stress on their relationship and her own background with domestic violence and abuse. I’ll get into that end shortly, but first let’s deal with this. The night of Johnny, who has his own history with domestic violence and abuse, tries to return the gun but Victim #1 accidentally triggers (and I mean the full psychological definition of the term here) causing him to shoot her in the stomach. Johnny then fires a shot, the ‘third’ bullet, at Victim #2: grazing the left side of his face and neck before dropping the weapon and fleeing the scene. Victim #2, despondent at this point, proceeds to kill himself.

It’s an absolute tragedy the entire way round. But, the game should not have ended like it did. Arguably, it should have been impossible for the game to end like it did. Why? The third bullet.

We immediately learn that a third bullet was fired at some point. Once that was established, both Detective Stone and the local police needed to establish that this third bullet wasn’t fired on the night of the murder to rule out any foul play. Local jurisdiction and biases regarded, there is still such a thing as proper procedure and it is immediately overlooked by both sides The shot that killed the husband clearly damaged the upper part of his skull, but not the lower part of his face and neck. That is the area Johnny shot him in. Even a backwoods police department could put two-and-two together there upon establishing a proper crime scene. This becomes even more egregious when you step outside of the house to talk to the neighbors and see this: 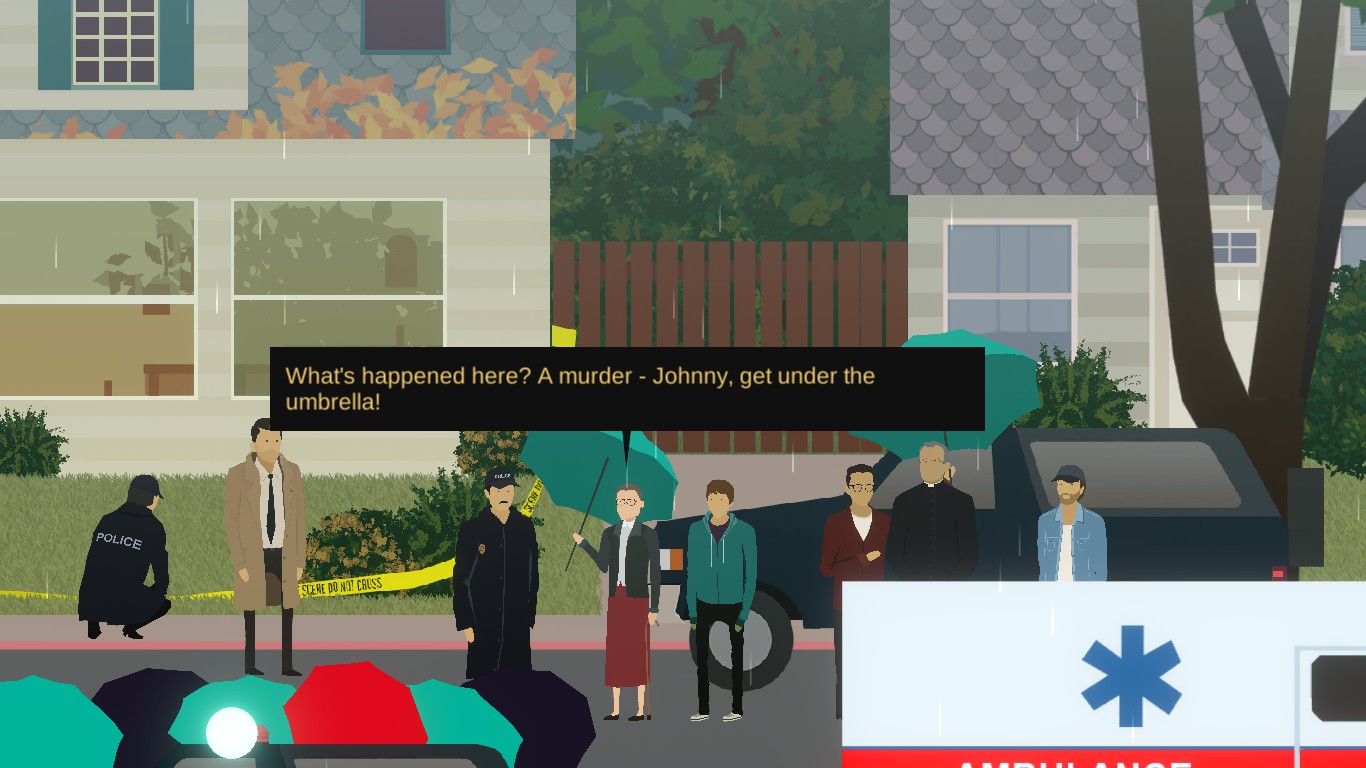 While this may not be too bad on the offset, we learn by the end of the game that the clothes Johnny is wearing when we first meet him are the exact same set of clothes he wore on the night of the murder. Not only does the kid get out without leaving a trace of evidence to suggest a murder in the house, but he also didn’t get a drop of blood on his clothes or shoes from the scene of the crime. And to anyone about to try and hand-wave this small point out by saying, ‘Well maybe he washed his clothes’…..You do really believe the atypical teenage boy would wash the clothes he won’t change out of without being told?

“So JP, the investigating authorities were incredibly sloppy on the case. What exactly does that change in the game?”

Remember when I said earlier in this segment about the secretive nature of small town culture? That’s the major thematic thrust of the entire game and even this small change directly affects the theme because by focusing on the murder instead of the town, the developers attempt to shift blame for the murder/suicide away from the person who did it (Johnny) to the culture that put pressure on all three individuals to conform (remember, Johnny is also kept quiet about his history of abuse to look normal). This would be an interesting theme to explore, but the developers decided going in that the fault belonged solely to the small town and not to any of the victims or the perpetrator. And here is where that logic falls apart.

No hiding the lede on this one: during a flashback we see Chris (Victim #2) hit his wife Diane (Victim #1). Yes, he was frustrated due to events of the story, but that doesn’t change the reality that he hit his wife: a woman who knows is a victim of physical and potentially sexual abuse.  And while, yes, he was apologetic afterwards, it doesn’t change the fact that it happened after a change of miscommunication and escalating verbal abuse. This is what led Diane to give the gun to Johnny in the first place. She was so afraid her husband might lose control that she didn’t want the gun in the house until she felt safe around him again. That is the in-game rationale for how the murderer of a victim of domestic abuse got the weapon that killed her.

This entire chain of events is, in narrative terms, a red herring. Again, the narrative/developers don’t hold Chris responsible for his actions. They hold the town responsible. The only individual held responsible for anything in the entire game is Michael Stone for the death of his wife. Everything else is environment. Because the society Chris and Diane moved to didn’t accept them, things spiraled out of control. It’s even punctuated at the game’s resolution if you missed the theme – 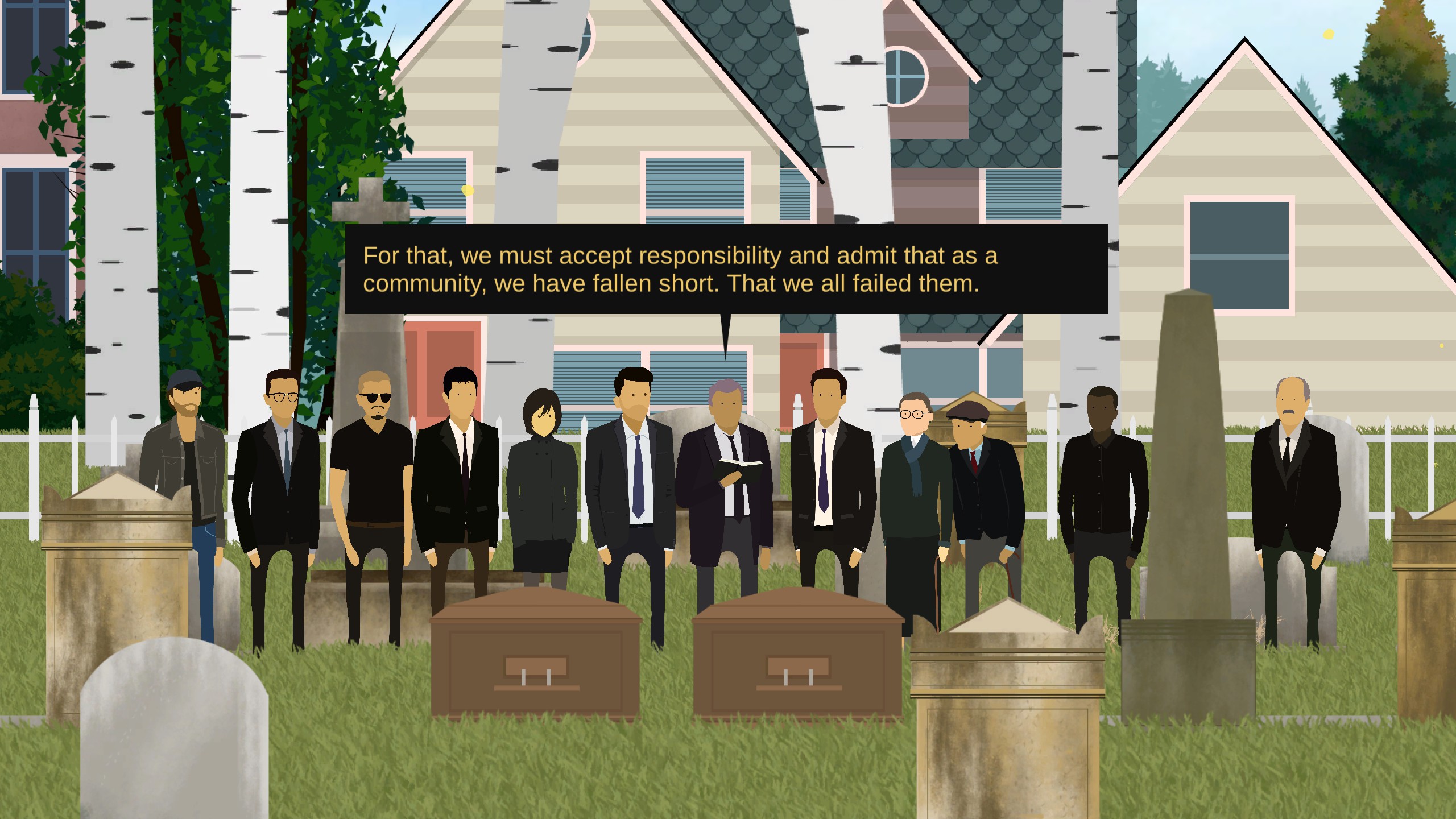 As I said before, Rainswept does a lot right. Considering the minimalist approach to its presentation the game pulls some cinematic moments: even outright beautiful ones. One its own, Detective Stone’s plot line is classic noir and would could have easily held the narrative together on its own. But the fact that the connective tissue of the game is focused on the presumption that this culture is the central antagonist and solely responsible for the woes of our victims is a problem. Yes, societies can be cruel and restrictive. However, at some point, individual responsibility has to kick in. You have to be held responsibility for both the good and bad you do. All of the rumors and innuendos circling this case cannot change that fact that our victims and perp are responsible for their own actions. And the reality that we spend five hours running in circles to try and change those facts doesn’t sit right with me.

Have you played Rainswept? What do you think of its major themes and twist ending? Do you think the small town culture plays the lead role in the murder/suicide? I’d love to know your thoughts in the comments. JP3: OUT.