Who Is Alice? Examining The Heroine of Draugen

Over the weekend, I had the opportunity to stream the latest release from Norwegian developer Red Thread Games: Draugen. The atmospheric mystery set in the fjords follows a young man searching for his sister. The story is dense and although it is a brief adventure, clocking in at just over three hours, it manages to spin an impressive tale of death, rage and regrets. However, for myself and the streaming audience, our intrigue came to a screaming halt as more was revealed about the protagonist’s companion: a teenage girl named Alice. It is safe to say that a great deal of Draugen’s plot depends on her personality and motivations: arguably making her the game’s heroine while the main character, Edward Charles Harden, serves as the protagonist and yes, there is a reason I’m using two distinct terms to clarify the roles they play. And the fact that, by game’s end, most of the questions we all had revolved around here is troubling to say the least.

So, I decided to take what I know so far from Draugen’s story to put together a better picture of the mysterious Alice. And, by doing so, perhaps we can get a better picture of how this ‘Fjord Noir’ tale ended. But, to do so, I will have to dig into the details of this game. So, if you want to play Draugen yourself, there are spoilers after this point. MAJOR spoilers. DO NOT read ahead unless you’ve either played the game or don’t mind spoilers. For all others, let’s begin. 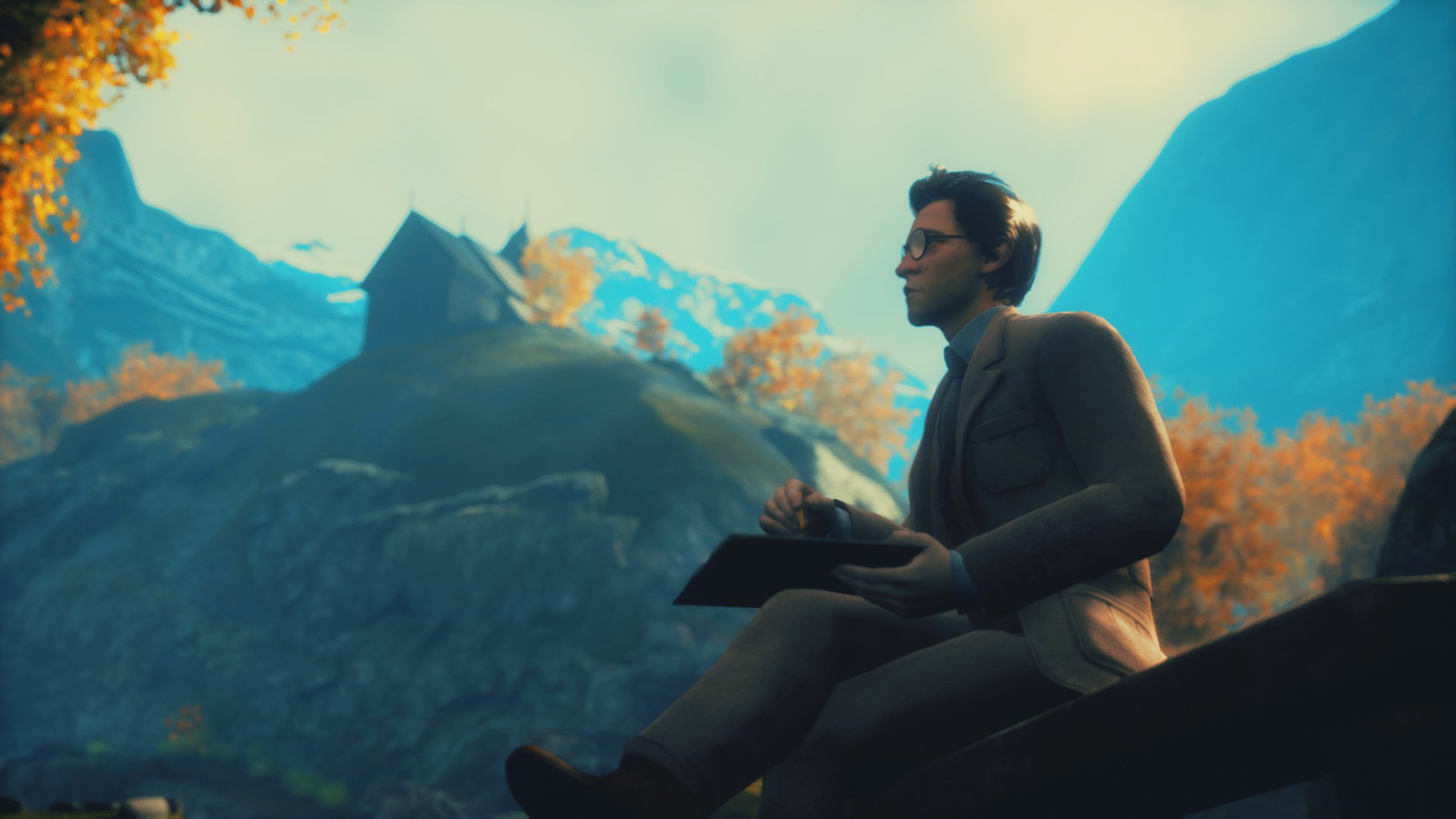 To understand Alice, you have to understand the game’s protagonist, Edward Harden, and the society around Graavik. From what the game tells us, he is a very troubled young man, to say the least. His younger sister Elizabeth died in a childhood accident and the despair of that event led both his parents to take their own lives. We don’t know who raised him afterwards, but he’s currently a student of history and psychology. Unfortunately, intelligence and isolation can have negative side effects. For Edward, that side effect are paranoia and hallucinations. Edward’s hallucinations revolve around his dead sister and often see him looking for her: forgetting during these episodes that she is long dead.

Now, it is important to note right here how Draugen handles any potential commentary on mental health. In fact, the game lampshades pretty hard that a lot of what Edward is going through isn’t due to his mental health directly. Rather, his mental health makes him susceptible to something else in action here. His condition also fits into film noir archetypes with detective/investigator characters. So, for those who understandably get upset with questionable portrayals of mental illness in media, Draugen doesn’t demonize the issue, but isn’t interested in commenting on it outside of pushing the need for eventual recovery.

This takes us to Graavik itself. From what I can tell of the story, the history of this town is atypical of many rural areas. It’s a small, mostly older population where the bulk of the younger population, have moved away. This drain not only affects the families, but also the local economy. With nothing to help the town grow the leading family of Graavik, the Fretlands, decide to invest in a mine hoping to strike iron ore. The brothers, Johan, Fredrick and Arne, supervised the mine and began to find modest success. Then, they found something down there that could have really changed Graavik’s fortunes. The game hints that it’s a viking cemetery, but we don’t have anything conclusive outside of some artifacts. The point is that whatever they found paled in comparison to what happened next.

First, the relationship between Johan and Fredrick completely deteriorated and Johan sold his share of the mine. Then, Fredrick’s wife passed away giving birth to their son, Simon. Arne Fretland died in a mine accident shortly after that and the mine’s key investing group outside of the Fretlands pulled out. This led to the town splitting into two: one side supporting Johan and the other Fredrick. Intimidation, brawling; murder. These all became common in Graavik over the next decade as things get more and more personal. Families are ripped apart as the city continues to decline. Post, telegraph and ferry services began to weaken or outright disappear. Some get out while they can and the rest become unhinged: filling the local graveyard with revenge killings.

In the midst of this there are two children born in town to Johan and Fredrick separately: Simon and Ruth. As the only children in Graavik (and the game does make a point that is what they are), the two do become friends and play in secret to not anger their feuding fathers. To make a long story short, Ruth was exploring the now abandoned mine one day and fell from a cliff to her death. Was it an accident? Maybe. But her father Johan is convinced it is murder and that Simon, his nephew, is responsible. Despite Fredrick’s attempts to convince his brother otherwise, Simon turns up dead next. With the last two children left gone, whatever is left of Graavik’s sanity goes with them. Johan’s wife soon passes away. Johan and Fredrick also disappear: leaving their family farm in a burned heap. Finally, because this cycle needed a bit more blood before spinning to a stop, the last two people left in Graavik seemingly commit a murder-suicide: the last murderer hanging himself after burying his victim.

So, we have two tragedies playing out side-by-side: the tragedy of Graavik and Edward’s family. How did they collide? How on Earth does a young man from Boston end up in Norway in the middle of a dead town? It all seems so coincidental once you lay out the facts. But, there is one final player we haven’t touched on yet. The subject of this very analysis: Alice. 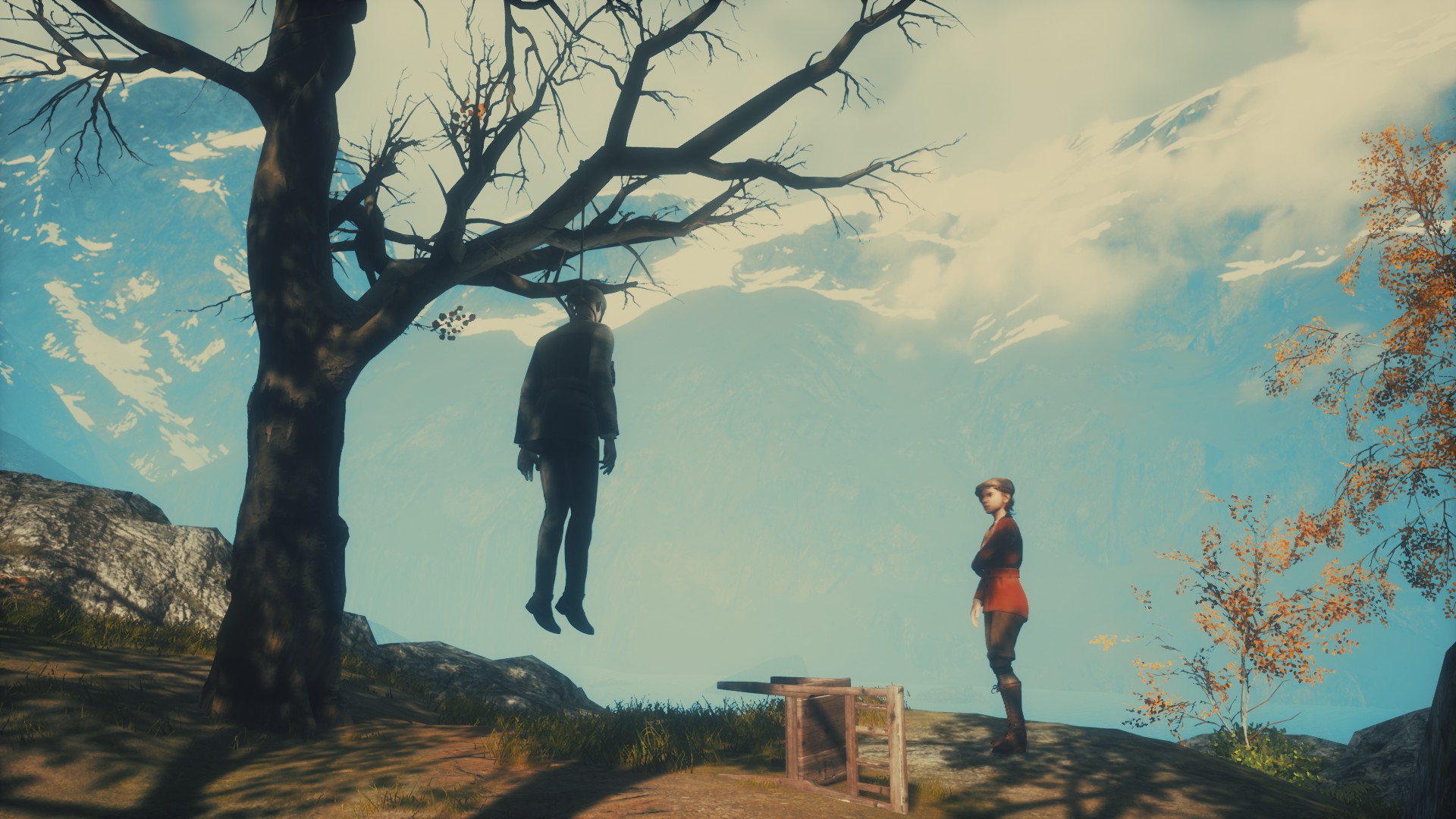 By the midway point of Draugen, it is clear Alice isn’t human. The fact she goes wherever she wants in the blink of an eye was suspicious enough. However, it was never done in our line of sight. Edward is notably less physically fit than she is, so the fact it takes him longer to get from Point A to Point B shielded her abilities well enough. When she finally does do it in front of us, though, it is a shock to the system that forces the audience (me) to try and reconcile her nature. At first I thought that she was a figment of Edward’s imagination or a ghost haunting him for some reason. Some in the chat hypothesized that she was actually a ghost of Betty, in fact. THEN, she tosses herself off the roof of the Fretland homestead because she’s ticked at Edward and THIS WEEPING ANGEL APPEARS.

This is where we get into theory territory and the reason why my Draugen stream ended on an off-note. The train of evidence on Alice literally halts here so the game can finish telling the story of Graavik and Edward Harden. This has left a lot unanswered on her, and a lot of the remaining narrative up to interpretation and potential sequel baiting. That will impact a future review: I assure you. For now, I just want to focus on what I believe is going on based on in-game evidence and how the story concludes. If I am correct, or at least close to correct, then it would give the game some much needed context.

“Alice” appears to be part of a sort of collective being (for lack of better words). As I said already, she’s not human, but she’s not a project of Edward’s wounded mind, either. She acts independent of Edward mentally and psychologically: frequently clashing with him and sometimes antagonizing him for her own goals. She shares the goals of the collective being, also known as the Entity (that Weeping Angel), however it’s to a point. The Entity’s goal is singular: she (it?) just wants Edward’s attention. Alice is capable of empathy and it leads her to brow-beating Edward to dig deeper into the mystery surrounding Graavik. This is done both out of her feelings after they found out about how Ruth died and to break Edward’s obsessive delusions. While she can come off as a little brusque, her ultimate goal seems to be to get the best possible good out the situation. It also tells me she’s probably the reason they’re in Graavik in the first place.

We know from the game’s ending that some of Graavik’s citizens fled to Boston. I don’t think Edward would have noticed the details or that it would have piqued his interest to here about there troubles. But, knowing her personality, it would have interested Alice. My theory is that Edward was experience another delusion and Alice didn’t push back on it immediately. Instead, she probably insinuated his ‘sister’ was in Graavik investigating the town. It would also explain why she was so patient with Edward in the first half of the game KNOWING he was chasing a literal ghost. She just needed him to keep going long enough to see something that would shake him out of his delusions so that they could solve the deeper mystery.

It would certainly be an interesting way to go about building a mystery series: a protagonist prone to paranoid delusions and the otherworldly entity trying to keep him focused. The problem is that right now that’s all speculation. The most we can get is that she’s not malevolent, but she is cunning enough to be manipulative if she feels the need to be and her empathy for Edward and others is her strongest quality. It will make the review interesting, that’s for sure. For now, hopefully this sheds some light on Alice and Draugen. It is an intriguing game and one that will have speculated on for a while. JP3: OUT.