A Quick Look At: College Kings

For months now, I’ve noted some mild progress when it comes to ‘adult visual novels. Even though the goal of the games remains the same (porn), some developers are trying to make interesting games around their core conceit. It has led to a few projects now that I’d argue are decent for what they are. So when I heard about College Kings, another Adult 3D VN in development, I decided to play the demo to see if the trend was continuing, or if it finally ran out of gas. Ultimately, there is some potential here, but it still has a long way to go before even reaching the mark left by its contemporaries.

Let’s start off with some things I like. Your female romance options are, so far, good bordering on great in terms of overall game mechanics. We will get into their characterizations shortly, but while all of them are interested in the protagonist on some level, not all of them want the same thing from him. Depending on your choices and your personality, Some you have to work for, some are fairly easy to romance, some just wants to bang and some aren’t that into you. That is far more reflective of current year romantic and sexual relationships than simply treating a relationship as an end game goal. This doesn’t have to be a strictly adult/porn thing. I think it would be perfectly reasonable for upcoming ecchi or romance games to use similar mechanics and update the usual romantic tropes.

I also really enjoyed that because this is fairly grounded as far as wish-fulfillment goes, you can’t just sleep around without others finding out. One of the best examples is a girl named Aubrey who we are introduced with getting slammed across the hall from your dorm room. When we actually get to meet her clothed, her interest is more in having a sneaky fling than an outright relationship, so she’ll usually invite you over to bang whenever she can guarantee no one is watching. The implications here, beyond what that says about her role in the story, is that she’s roommates with several other women who are connected to other girls you have an option of dating. It doesn’t matter how careful she and you are about your hookups: someone will find out eventually. Aubrey is a gamble and whether or not you’re in factors deeply into your storyline.

I also like the underlying meta-narrative of the game: making decisions. College is a strange time where the students are all adults but, in many ways, are shielded from the full responsibilities of adulthood in the name of education. This means decisions made by students are often inconsequential and the ones that are don’t make themselves apparent until years later. This issue is lamp-shaded throughout the demo in dream sequences, a psychological exam with one of your romance options, and a very well done date scene with a woman out of college whom we meet by chance. Age is something that exists in the game and the difference between the students and the adults comes down to the triviality of the choices they make day-to-day; something the protagonist knows and is terrified of.

I love that dynamic and how the game frames it in both a positive and a negative for the cast. Most of the matters you deal with, especially the ones that leads to a sexual fling, are not serious. There is a freedom in that which fuels a lot of the nostalgic drives and youth worship in popular culture. However, you also get a taste of a lot of the negatives. Toxic environments that reward negative masculine stereotypes (that’s a hell of a word salad for ‘fraternity culture’), criminal behavior that gets excused or ignored in favor of a broken university code of ethics, and the arguable subconscious of the entire game: sexual harassment and male chauvinism. Most of the supporting male characters are outright swine and their pettiness and pride drives the overarching plot. The protagonist isn’t exempt from this at all, but by chasing certain options, you are pulled further from the frothing pit by your relationships and the more the campus attractions of hookups and fighting seem, for a lack of better words; childish. This state of semi-awareness probably won’t go the entire game, but the fact it is included at all is worth examination and we’ll see what they do with it.

Now for the not fun stuff. 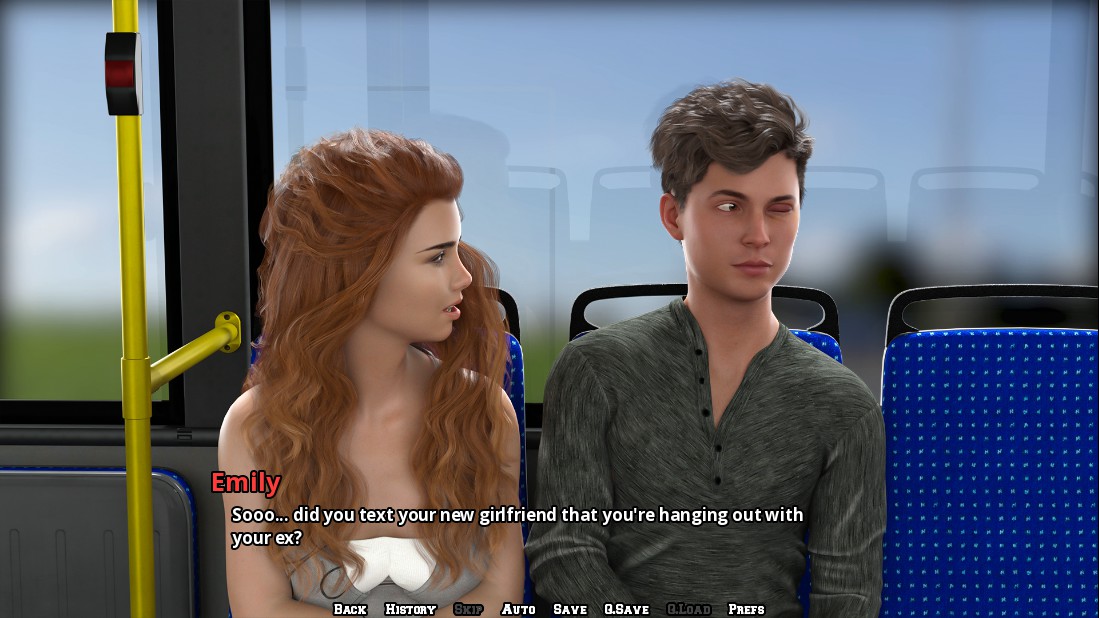 Even with the underlying themes, this game feels like I’m playing a CW show and the fact I had to type that makes my skin crawl. With the exception of the protagonist and Chloe, what you see from this cast is what you will get. The ricochet of that is that the overall story, when its not playing on the line of its subtext, is boring. None of the conflicts survive the five seconds it takes to think the reasoning behind it through and the developer hits a stone wall when it comes to spending time with the girls who don’t want to immediately ride the protagonist. Tack on the fact that this is all supposed to be happening in a matter of DAYS and it feels like a mad rush to find something, anything to keep the audience invested when the continued, years long answer to that problem is to SLOW DOWN.

The best example of this is Emily (picture above). She was the protagonist’s girlfriend in high school but due to….unspoken circumstances, she cheats on him. You have the option out of the gate to drop it and if you do, she is quick to maneuver the protagonist back into bed with her. Yes, I will allow the caveat that these are stupid kids approaching their broken relationship in a stupid way which feeds into the larger meta of the triviality of college life. But the exact same goal could have been achieved, and also would have been clearer, by slowing down, allowing for forgiveness but making it clear there is still a lot of damage there and framing their relationship (and even potential sex between the two) as a haphazard attempt to reconcile what they went through, NOT (as the Steam achievement for this route boasts) ‘RECLAIMING’ YOUR EX.

Similar issues come up whenever the protagonist tries to flirt with women older than him. Clearly this douchebag has nothing to offer most women outside of his age range outside of an illicit, momentary thrill. But you have to get there in order for the audience to say, ‘Well, okay; we’ll go with it.’ It doesn’t help the framing of potential age gap romances are, outside of the women you meet while shopping, with your teacher and Julia: the woman whom the game refuses to say is your Mum. It doesn’t immediately throw you in with them, but by hinting at potential scenes down the road, the game wants to have its cake and eat it too: recognizing the contradictions and reveling in them. It’s porn, so, of course it does. But on this one, it would have been fine with me if it didn’t.

Finally, remember the mechanics I was praising earlier? That stops with the core idea: the fighting mechanic. At the core of the story is this inter-fraternity fighting competition the protagonist can climb the ranks of and establish himself as the Alpha Male of the university. The idea is essentially a Quick Time Event in which you recognize an opponents defense or offense and react accordingly. The problem is two-fold. First, there is no prompt for when to react so you have to time your action perfectly in order to register the action. Second, this is a 3D Visual Novel which means the animation speed and fluidity can, at times, be garbage. The stuttering and pauses are not a problem in other scenes where they are animating the sex or showing the characters going in for a kiss (although it is awkward and stilted). Here, when you are trying to win a QTE segment, it can get painful. Some fights, you will just be button mashing and hoping for the best; which is a waste of a potential game play element. Hopefully the final product will smooth this out, but right now you’re better off just skipping the fights and considering the narrative and marketing importance of those fights, that’s not good.

So that was my time with College Kings. We’ll see how the final product goes, but right now it needs far more time in development, a stronger focus on its idea of making decisions at the protagonist’s age and in the college environment, and making the rest of the characters interesting enough that you want to spend time with them. I’ll be keeping my eye on it and will report back when it gets closer to release, but we are still a way’s away from that. If you want to check it out for yourselves, you can find out more information here. JP3: OUT.