It’s Wednesday. You know what that means.

I swear if I ever do another convention, I’m bringing sticks with me to do a live Calcutta Club. If nothing else, everyone who shows up gets a premium smoke out of it. (It will be a success if we get Micah Solusod to smoke one on stage, IMO.)

First and foremost, I hope that everyone was able to enjoy their Thanksgiving, Christmas, Hanukkah and other various December celebrations. If you had the privilege of spending that time with friends or family, I hope y’all were able to get the most out of those small moments. As for me, the food was fantastic, the cigars were exemplary and I finally got a chance to draft a few things for this website, so it was pretty much an all-around win. I also had a chance to reflect on some of my old fictional works: especially in conjunction with the pieces I am working on now. Today, I want to muse on that and the healthy benefits of a writer revisiting and even rewriting their old work. It’s a fairly common practice, so I’m not breaking new ground on this one. But I do think it will be fun to muse over and a practice that could be interesting if used in gaming as a whole, not just visual novels.

Let’s start here. Do you know why I like cigars? Not only is it Zen, but unlike other forms of tobacco, cigars are uniquely created to absorb unique flavor during the fermentation and aging processes. With time and patience, you can cut a cigar and inhale it cold to not only judge the draw of the cigar, but also get an idea of the flavors in the tobacco. Like everything else in life, the environment determines optimal flavor. Writers are much the same way. When we start out, our work is more reflective of the media we’re consuming at the time. It makes perfect sense: we simply do not have the life experiences or interests to write about anything else. However, the hope is that in time, age will add interests, experiences and, well, understanding of life that adds a different flavor to your writing. Moreover, age should bring an understanding about certain things that allows a writer to create characters that they couldn’t when they were younger.

The legendary television producer Dick Wolf was once asked years ago about hiring younger writers for his programs. I keep his quote because, in many ways, it gives me confidence in my own writing and what I bring to it as I age. I want to share that quote with you now,

“I’ve never understood the obsession with younger writers and dramas. Comedies I understand, but how do you write drama at 23; you haven’t experienced anything. You know about 23-year-olds. It’s kind of hard to write about 60 year old EADAs [Executive Assistant District Attorneys]. Only a couple of us are 60 years old so far, but there are not many 23-year-olds who can write about life-changing situations unless it’s medical. That sounds weird, but there’s not the mileage on the odometer to get under the surface.”

He’s right. When I was younger I wanted to write stories with older characters and, more often than not, failed. So many younger writers often create ‘older’ characters that are just twentysomethings with wrinkles added by the makeup department because what else would we do? We don’t know. But, knock on wood, we’ll all be 30, then 40, then 50, 60 and so on. In that though is an incredible gift that is unique to the creative set: the ability to autopsy the ideas of our youth and try again but from a different, older angle. One of the things I dabbled in as a kid, but never could get my arms around was romance in fiction. Yeah, I know what the expected example would be here: political drama, crime thrillers, cosmic horror, etc. And yes, I like all of that to a nearly obsessive degree. And yes, there is the fact that I’m me. I’ve been far too cynical for far too long. I will not experience the level of intimacy I’m talking about writing. So what I’ve always struggled with is how to describe in two fictional characters an emotional connection I won’t feel.

When I was young this was annoying because not matter what I’d write it would ring false. But as I’ve aged and see loving relationships, successful and not-so successful couples, and broke it down and translated it in a way thirty-something JP could do with the gift of time sixteen year old JP couldn’t, I think I’m getting closer. Here’s what I understand to the best of my understanding: what makes romance works, in writing at least, are small moments that communicate something only the two people involved fully understand. So, as a writer or artist or actor, your job isn’t to make the big moments feel like a great Aphroditic victory. It’s to make the small moments between them comprehensible to the audience, yet only fully understandable by them.

That was nigh-incomprehensible. Let me try another way.

Nate and Elena from Uncharted are the gold standard of how to write A) a working partnership B) a romantic relationship. If you have never played the Uncharted series, I will fight you on the side of the street. But other than that, I’m about to spoil a small moment in the series so, yeah; spoilers. In Uncharted 4, there is a scene where Nate and Elena are exploring a massive dining room on the pirate hideout of Libertalia. Nate (and I will keep this one vague to preserve some of the punch for you who haven’t played) had taken actions that seriously violated Elena’s trust in him. Up to this point of the game, they’re both trying to reconcile but it isn’t working and you can see the crack in their relationship start to widen and for a very brief moment, the developers put doubt into your mind that this relationship will last. By the time they get to the dining room, things are still chilly and for the audience who have stuck with these two for three games now, its still very, very rocky. Then they get to the table with a bunch of skeletons and Nate figures out how they died. And our boy is so wrapped up in this moment of absolute geekry that he doesn’t notice this: 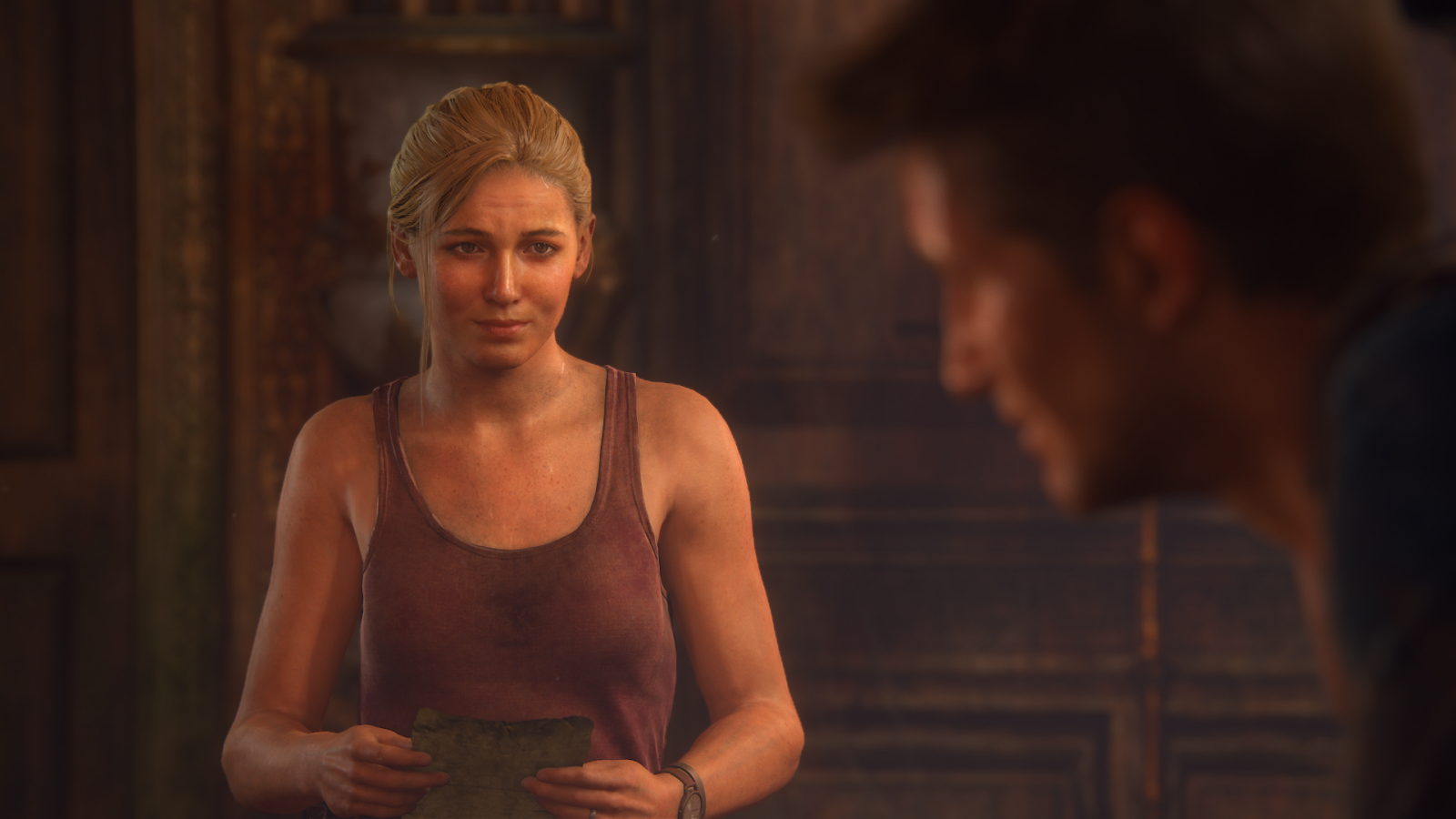 You do not know what I would pay to translate that look into my writing. I’m talking literal organs and an arm at this point, because I only need one kidney, my right arm and half of a liver anyway. I could write two essays minimum on the depth of the stories being told with this one frame of a thirty-plus hour game. But for the sake of my own personal geekry, YES this shows that she’s already forgiven him. This is the surface-level reading of this scene. Just under that is Elena remembering why she fell in love with him in the first place. Yeah, he lied to her, but he lied to her to be this guy again. Underneath is something else that I don’t know and, more importantly, I’m not supposed to know. That’s the intimacy part: the part that’s strictly between Nate and Elena that only they know. Yes, credit for this goes to the animation team and Emily Rose who is underrated in her role as Elena. But also somewhere in the bowels of Naughty Dog is the script for Uncharted 4 is a line that says ‘Elena looks at Nate and sees the man she fell in love with fully embracing what he is most passionate about: something that both brought them together and nearly ripped them apart. Elena: ….It’s Incredible.’

So, the last time I tried to write an even quasi-romantic story was about ten years ago for a role-playing site I was involved in and it was not good. I’m going to be giving it another go over the next few weeks. I’m not sure if I’ll share it with you guys, but I’m excited to give it another go and want to encourage writers and visual novel developers to look back at a story or story idea they had ten years ago and consider this exercise. It may not be based on the same goal as mine, but it could be interesting to see the various approaches that come with age. As for everyone else, what are some stories or ideas you had ten years ago? Let me know in the comments. JP3: OUT.