What Went Wrong (For Me) With Necrobarista

It goes without saying that this feature will contain spoilers for Route59’s Necrobarista. If you’re interested in playing the game yourself spoiler-free, this is your first and only warning to click out. If you want my overall thoughts on the game, I gave it a 4 out of 10 (Below Average) in the December 14th VNRD. You can read my thoughts there. Last chance! If you’re still reading this sentence, I have to assume you’re fine with spoilers. So, if I see you bitching in the comments; know I will mock you.

In the final hours of Necrobarista, a revelation occurs that turns this somewhat boring Slice-of-Life tale on its head and, at least for me, decimated whatever good will for the title I had left. Throughout the promotional material for the game, you see a guy with a spiky haircut and a white lab coat. His name is Chay and until that moment, it would be fair if the audience thought he was not that important. Chay stays in the background through most of the game: giving advice from time to time, but mostly serving as the straight man to Maddy’s insistent ‘Too Cool For the Room’ persona. We know that he owned the coffee shop before Maddy and was her teacher, as well as friends with Ned Kelly: one of the agents of the unseen governing body in this magical world. And, with the clock winding down, we also learn that he is dead and what is in front of us is a ghost.

Sometime before the events of the game, Chay dies a natural death. Maddy, according to this story, refuses to allow him to pass on and uses necromancy to keep his ghost attached to the world of the living. She has since been working on a spell to transfer life force (for lack of better words) to resurrect Chay. This isn’t portrayed as a heroic or even kind gesture. In fact, it’s mentioned several times by Chay and others that he doesn’t want Maddy to do what she is doing. It’s even hinted at that his soul is being kept on this mortal coil against his will. Yet, Maddy goes through with it: her experiment failing several times before Chay tells her emphatically to stop. Afterwards, she cedes to his wishes and is…fine. There is very little change in her cool demeanor. She just accepts it and, if anything, because the strong person for Chay who dives head first into his emotions as he accepts his fate. By the end, Chay passes on and life continues on, however by ending it this way, the developers accidentally rip their façade.

The fatal flaw with Necrobarista is so childishly simple I am truly shocked none of my fellow reviewers have pointed it out: Maddy is the villain of the story.

Let’s back up, because to understand this, you have to look past the lie of the narrative. The ‘lie’ told to the audience is that the game functions outside of our understood morality. There is no good or evil here because death, in and of itself, is immoral. But, as I said before, that is not true. In the first act of the game, we meet the character Kishan. Kishan is recently departed and spends most of his time waiting to pass on hanging out with Maddy and her group. While he is distracting himself from the fact that he’s dead, he gambles with Maddy for some of his remaining hours in existence. After losing, both Chay and Ned admonish Maddy for her actions: clearly defining what she did as wrong and creating a moral code the game chooses to ignore for her. Later in the second act, we learn that the tree Maddy plans to use as a part of her experiment has more than enough life force in it to pay the debt that serves as a narrative red herring for the game. This debt is the bait she used to lure Kishan into gambling with her.

So, put two and two together. She’s stealing life force from people she doesn’t have to just because she can and feels no remorse about it with the singular exception of Kishan. What else would you call these actions but villainous?

This feeds into her holding on to Chay’s soul. We never get a definitive reason for why she does what she does, but her necromancy experiment seems to be the end goal. Context: necromancy is heavily regulated in this world and most of the administrative side of magic tries to keep the natural balance intact by punishing anyone who doesn’t cross over when its their time. In his final hours, Chay expresses his defiance at this and reflects on his time rebelling during his life by studying and practicing necromancy. By her actions in the game, it is clear Maddy adopted both his defiance and his study. This means though that she didn’t keep him around for any sentimental or moral reasoning. She kept his soul in place as a guinea pig for her experiment since it requires a dead test subject.

Whether or not Chay agreed to these terms is a question the game never goes into. The developers rush through the final act of the game with a speed Usain Bolt can only weep at in jealousy. But, this is also where things narratively collapsed. If he did agree to this, what made Chay change his mind in the end? If he didn’t, why didn’t Ned Kelly report what Maddy was doing to his superiors? Chay is a regular in the café through the events of the game and it is made clear in Ned’s backstory that the Death Council (not their official title, but I’m going with it) has no problem hunting down souls who stay pass their expiration date.  So why is everyone okay with this? And, really, why does she want to do this? Is she just a human being looking for some solace in a world that, even with her knowledge, she cannot fully control? Or is she a monster who will stop at nothing to do what she wants, when she wants, even if she has to desecrate the dead to do it? 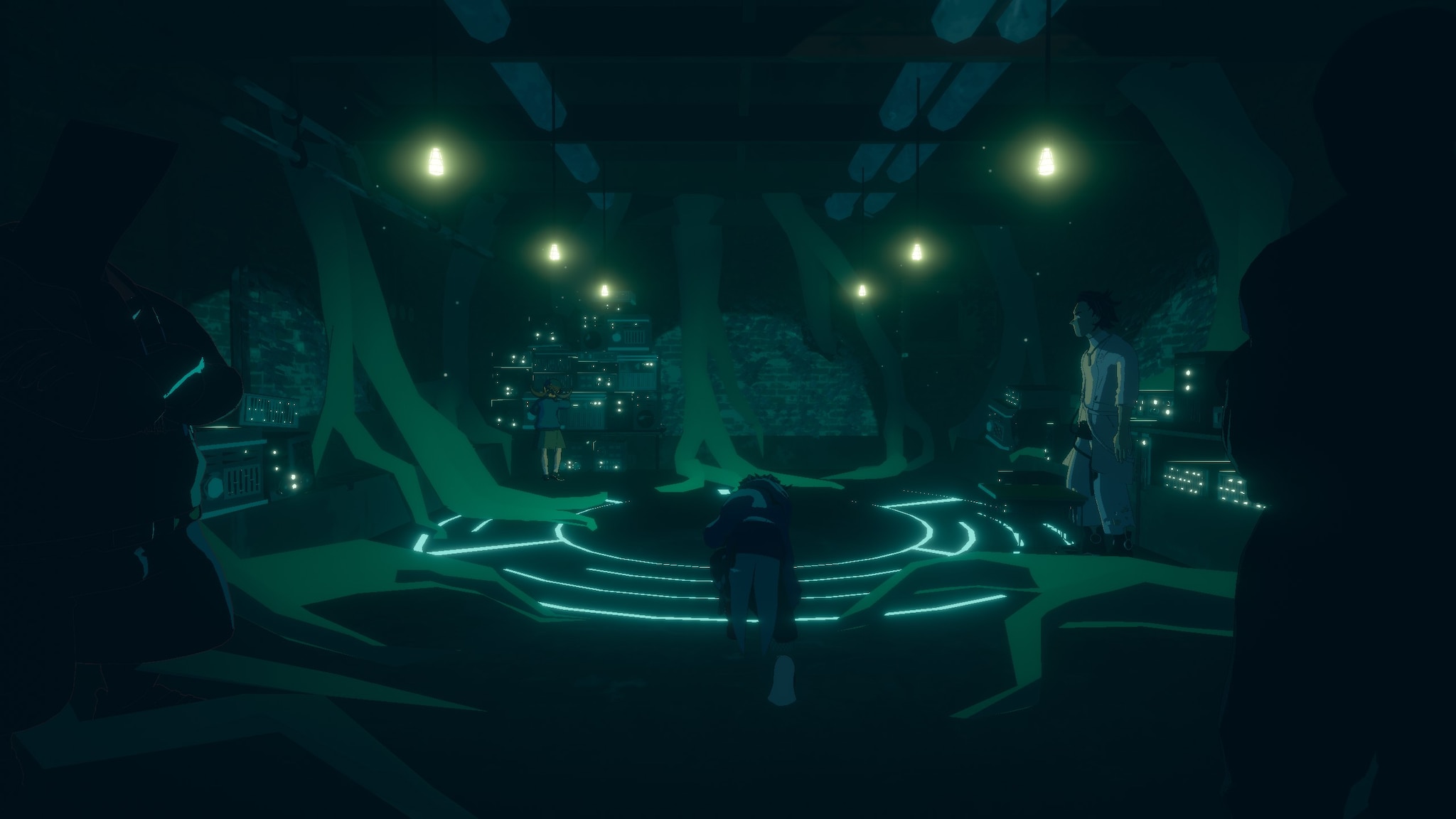 I enjoy well-written villains in most narrative context and the English Visual Novel space can always use more of them. If the game had just embraced the dark nature of the story they clearly were tempted to tell, then we have an entirely different kettle of fish. Now you have a proper musing on the nature of death instead of the tantrums Kishan and Chay throw. Now you can explore how death truly effects those left behind and how they react to it: sometimes healthy, sometimes not. Most importantly, now you can explore Maddy’s character for what it is instead of what the developer’s want it to be. The cool and confident badass the game tries to shove down the audience’s throat doesn’t exist. Like Chay himself, it’s just a ghost hidden under an absolute unit of snark and Slice-of-Life banter. We never meet the real Maddy or, for that matter, the real cast (Sans Ned) because we don’t really see them dealing with the situation at hand.

When I said in my review that I hope the developer revisits this title five or ten years down the road, after they’ve developed a few more projects, this is why. Part of it is frankly so they can nail down structure. The game bounces in between Maddy, Kishan and Chay as point-of-view characters but never in a way that matters. And again, there is an idea here explored in the third act that is, frankly, terrifying that could be the entire plot of its own title. I can imagine this was a sloppy attempt for the developer’s to have their cake and eat it to: giving the audience something to ‘feel’ while attaching the audience to their cast emotionally. After all, we all have at least one person we never want to see go into that cold ground alone. But, it doesn’t work. Nothing in Maddy’s character or her actions show her to be anything more than a vapid sociopath: leaving any meditation on the desired themes of the game for the audience to come up with on their own. It’s a shame, as it did have potential.